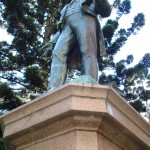 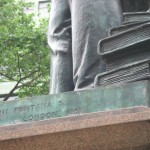 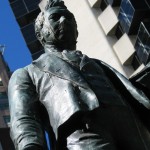 The bronze statue sits on a polished grey granite base, with a cornice of fine-grained red granite. It was sculptured by Giovanni Fontana of London at a cost of 4,500 pounds and finished in two years. Some years earlier the Memorial Committee had enlisted J. Barnett, son of the Colonial Architect, to design the statue’s base. Some of the building materials used in the base, and the tools for putting them in place were donated by tradesmen and this gesture was lauded as unique proof of the esteem in which Lang was held by all sections of the community.

Early pictures of Wynyard Square show the statue’s dominance of this space at the time and into the 20th century. The contraction of the park’s open space and the growing spread of the boundary trees means that the statue no longer dominates Wynyard Square.

John Dunmore Lang (1799-1878) was honoured for his varied contributions to the Church and the State. In addition to his recognition as a founder of the Presbyterian Church, Lang was also celebrated as an advocate for the separation of Victoria and Queensland and the colonisation of New Zealand; as an ardent republican; and as an influential individual on much of Sydney architecture through his introduction of Scottish mechanics to the colony in 1831.

An opponent of both the emancipists and the exclusives, Lang sought to repopulate Australia with free settlers. This ambition was partially achieved through the assisted emigration of thousands of Scottish Highlanders and others. Although a trained Presbyterian minister, Lang combined Pastoralism with an active career in politics and publishing. His term in government stretched from 1842-1853 and 1859-1869.

Giovanni Fontana (1821-1893) was born in Carrara, Italy and died in London. As a sculptor he specialised in classical and allegorical groups. Although Fontana sculpted a number of marble statues and groups for public buildings in Sydney, he was based in London. Among his sculptures for public buildings in Sydney were figures of Australia and the Prince and Princess of Wales in the Colonial Secretary’s Buildings, and the group which includes Queen Victoria over the Martin Place entrance to the General Post Office. These works were sculptured in the 1880s and prior to his bronze portrait figure of Lang.