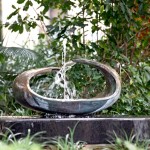 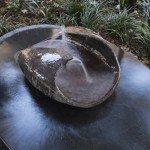 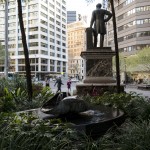 The John Christie Wright Fountain is characterized by a single vertical jet that contrasts with fan shaped water extending from the curved form of a small copper bowl. An overflow cascades onto the surrounding river stones and garden bed.

The fountain was erected in memory of young sculptor, John Christie Wright (1889-1917). Wright was born in Scotland and moved to Australia in 1912. He was awarded the Wynne Prize for sculpture in 1915. Wright enlisted in the A.I.F. in 1917, and was killed in action in France on 3 May that year.

Gerald Lewers (1905-1962) was born in Hobart and developed an interest in sculpture during childhood. In 1950 he retired from his job as construction engineer in the firm Farley & Lewers to dedicate himself full-time to sculpture.

Lewer’s fountains were largely abstract, unlike his sculpture, and all feature a wonderful balance of sculptural and water forms. He was fascinated by dynamic movement and felt that copper was best suited to creating forms that complemented the flow of water.

Gerald and his wife Margot Lewers were leading artists in the development of modernism in Australian art. Their art collection and home at Emu Plains on the Nepean River, were bequeathed by family to Penrith City Council in 1980 and opened the following year as Penrith Regional Gallery & The Lewers Bequest.

Early in 1960, Jean Hague-Smith offered to donate a fountain in memory of J.C. Wright to the City of Sydney and to bear the cost of its erection. Sydney sculptor Gerald Lewers, who had just won a prize in the City Fountains Competition, was commissioned to produce the work.

An inscription on the right plaque mounted on a stone wall abutting the fountain: “These laid the world away: gave up the years to be / Of work and joy and the unhoped serene, / that men call age; and those who would have been / Their sons, they Gave their immortality. / Rupert Brooke”

An inscription on the back wall reads: “Sculptor: The late Gerald Lewers”

Major restoration works were completed in 2012.

Blow out, you bugles, over the rich Dead!

There’s none of these so lonely and poor of old,

But, dying, has made us rarer gifts than gold.

These laid the world away; poured out the red

Sweet wine of youth; gave up the years to be

Of work and joy, and that unhoped serene,

That men call age; and those who would have been.

Their sons, they gave, their immortality.

Blow, bugles, blow! They brought us, for our dearth.

Holiness, lacked so long, and Love, and Pain.

Honour has come back, as a king, to earth,

And paid his subjects with a royal wage;

And Nobleness walks in our ways again;

And we have come into our heritage.