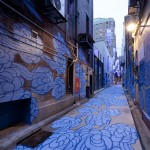 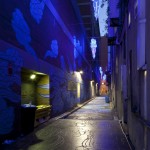 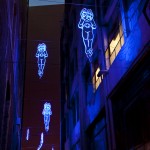 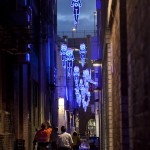 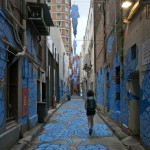 In Between Two Worlds by artist Jason Wing forms the centrepiece of the City of Sydney’s upgrade to Little Hay Street, Factory Street and Kimber Lane in Haymarket. By day, this unassuming lane is animated by blue clouds and silver figures, transforming an otherwise ordinary service lane. By night the ‘spirit’ figures illuminate the lane with an otherworldly blue glow, inviting visitors to explore this new addition to Chinatown’s vibrant night-life.

The half human, half spirit figures in Kimber Lane represent our past, present and future ancestors. The themes of heaven and earth, the elements, and respect for ancestors past and present, are universal. The figures are inspired by Aboriginal and Chinese heritage but do not discriminate other cultures.

The cloud mural pattern has been painted on the laneway ground and wall surfaces and etched into the granite paving. When repeated, the cloud pattern symbolises never-ending fortune.

This artwork is currently affected by adjacent construction. It will be restored as soon as possible.

Jason Wing is a Sydney-based artist who began as a street artist who has since expanded his practice to incorporate photo media, installation and painting. His dual heritage, being both Chinese and Aboriginal is increasingly addressed within his work. Influenced by his bi-cultural upbringing, Wing explores the ongoing challenges that impact his wider community.

A new series of public art projects was initiated in 2010 to revitalise and extend Chinatown’s public spaces.

The program is based on extensive community consultation and developed by Curatorial Advisor Aaron Seeto as part of the Chinatown Public Domain Plan.

The approach recognises the existing artworks commissioned in 1999 and the character of this vibrant urban area.