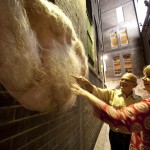 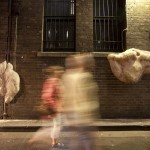 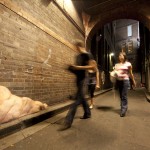 This prosthetic is an emulation of human skin, a tenderness emerging from an unsympathetic environment.

It is enigmatic yet strangely familiar, giving the sense of finding something dear to us without even knowing it had been missing.

The work is a harbouring of our own humanity; instilling not revulsion but an odd empathy for the new organism.

A series of four prosthetic ‘skins’ were fixed onto the worn brick wall in Bridge Lane at the side of the Burns Phillip Building at 5-11 Bridge Street, Sydney. These sculptures explored the interaction between us and our cities by questioning identity and environment.

The installation was intended to blend with the building colour and textures, yet to reflect the texture, muscle tone, pigment, hair shafts and moles or discolorations of skin. The idea was to make the work appear to be slowly growing out from the building, like it’s been there a while but it is only now that we notice them,

The project grew out of the innate human ability to try and read subtle personality differences into details of a human body. To take these qualities out of context, having them belong to an old laneway, created a scenario where we begin to project our own characteristics into these buildings and invent a human narrative for them. The installation was intended to instil not revulsion but an odd empathy for the new organism, a tenderness emerging from an unsympathetic environment.

The concept behind I Dwell in the City was to get people thinking about how their environments affect them. The buildings themselves were taking on human characteristics. To look at this in reverse, and think about the effect the city has on us, leads us to understand that where we live and work plays a big role in shaping our identity.

This installation sought to compare the function of human skin to that of the buildings we inhabit. Both skin and buildings are designed as a protective layer to shield from weather and temperature conditions. But buildings should also be intelligent; constantly adapting to changing climatic conditions; they, like us could breath, flex and respond to the season and climate.

The process to produce the work was labour intensive and similar to special effects prosthetics. The separate parts were sculpted in clay, transferred to fiberglass casts and silicone, and then attached onto a rigid frame that was fixed on site. A barely audible heartbeat pulsed through the laneway to visualize the decay of aging bodies. The sounds reflected a subtle pulsing and occasional flexing on the surface, using small animatronics concealed within the prosthetics.