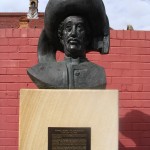 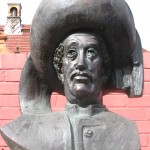 This bust of Prince Henry is made from bronze and sits on a diagonally striated sandstone plinth. Prince Henry wears a one-sided coat and a large hat with cloth-like drapery over it. The bust faces north and is located in the Plaza Iberoamericana on Chalmers Street, close to Central Station.

It is one of a series of busts of famous Latin American heroes on display in the plaza commemorating the contribution of Spanish and Portuguese speaking people to the history of Australia.

Henrique, Duke of Viseu (1394–1460) was a prince of the Portuguese House of Aviz and an important figure in the early days of the Portuguese Empire. He is known in English as Prince Henry, the Navigator or the Seafarer. He promoted early Portuguese efforts to explore an African route to Asia, and reportedly inspired his father’s successful conquest (1414-15) of the Muslim port of Ceuta, on the North African coast across the Straits of Gibraltar from the Iberian peninsula.

At his Vila do Infante (“Prince’s Town”) at Sagres, Henry gathered around him a school of navigators and map-makers, and became the patron of the Portuguese voyages of discovery. The school at Sagres achieved several advances in the art of navigation, and their discoveries provided the groundwork for Portugal’s colonial expansion. Thus, Henry had a considerable impact on the course of history, arguably having sparked European interest in colonial exploration that would so transform the world for the next four centuries.

Born to King John I and Queen Filipa in the city of Oporto, Prince / Henry symbolises a new era of political, economic, cultural and / scientific relations.

The Portuguese had gradually been improving and making use of / inventions in the art of navigation which were decisive to the “Great / Discoveries”. They had also been gathering a vast corpus of / geographical, astronomical and mathematical science as well as / practical information from travellers, pilgrims, traders and fishermen.

By the time of Prince Henry’s death in Sagres, Portuguese voyages / were so extensive and systematic that the country was in a unique / position for launching a global plan for maritime expansion which / would bring Portuguese ships to this and other parts of the world.”