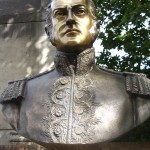 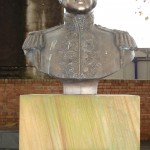 This bronze bust of General Jose de San Martin sits on a striated sandstone plinth. General San Martin is dressed in an ornate, collared coat with floral patterns at the edge of the collar extending all the way up to the neck.

The sculpture is located in the Plaza Ibero Americana on Chalmers Street, and faces east. It is one of a series of busts of famous Latin American heroes on display in the plaza commemorating the contribution of Spanish and Portuguese speaking people to the history of Australia.

José Francisco de San Martín y Matorras (1778-1850) was an Argentine general and the prime leader of the successful struggle for independence from Spain of the southern nations of South America. Together with Simón Bolívar in the north, San Martín is regarded as one of the liberators of Spanish South America. He is a national hero in Argentina, Chile and Peru.

San Martín was born in the town of Yapeyú in the province of Corrientes, Argentina, then a Spanish colony (part of the Viceroyalty of the Río de la Plata). His father was a Spanish official. As a child he was sent to Spain where he received his education at the military academy in Madrid. He was commissioned as a Second Lieutenant in 1793, and rose to the rank of Lieutenant Colonel in 1808.

He fought with the Spanish army against Portugal, in the African colonies, and against the invasion by Napoleon’s forces. In 1812 he resigned from the Spanish army and sailed home to Argentina, where he offered his services to the revolutionary forces. He led the rebels against the Spanish forces under General José Zavala at the Battle of San Lorenzo on 3 February 1813, which became the first victory of the Argentine War of Independence. He went on to play a pivotal role in the liberation of both Chile and Peru from Spanish colonial forces.

In 1824, after the death of his wife, Remedios de Escalada, Martin moved to France with his daughter Mercedes, where he spent the remainder of his days retired at Boulogne-sur-Mer. His last act on Argentine soil was accepting a gift from Buenos Aires governor Juan Manuel de Rosas and refusing to fight in the civil wars that tore the country apart.

An inscription on the plinth of the sculpture reads: “GENERAL JOSE DE SAN MARTIN / 1778-1850 / NATIONAL HERO OF ARGENTINA / LIBERATOR OF ARGENTINA, CHILE AND PERU”.