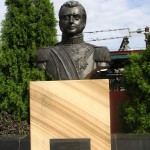 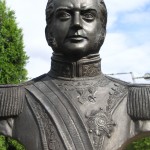 The bust of General Don Bernardo O’Higgins, the liberator of Chile, is made from bronze and stands 20 centimetres tall. It is placed on sandstone plinth approximately 1.2 metres tall by 0.5 metres wide. It is one of a series of busts of famous Latin American heroes on display in Plaza Iberoamericana on Chalmers Street commemorating the contribution of Spanish and Portuguese speaking people to the history of Australia.

Bernardo O’ Higgins was the illegitimate son of Ambrosio O’Higgins, an Irishman who entered the Spanish service and eventually rose to be Captain General of Chile and Viceroy of Peru. O’Higgins’ education in Chile and England began his transformation into a partisan of the revolution. He was eventually exiled to Peru in 1823 where he lived until his death in 1842. He was a patriot and an advocate who is ranked with San Martin and Simon Bolivar among the great liberators of South America.

The statue of Bernardo O’Higgins was formally presented to the City of Sydney by the Consul-General of Ecuador, Dr Beatriz Cocios de Durah, on 23 October 1989. It was unveiled in the Plaza Iberoamericana on Saturday 25 November 1989 by the Chilean Ambassador Jaime Herrera.