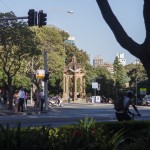 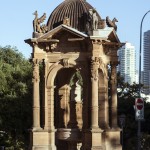 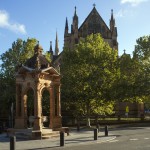 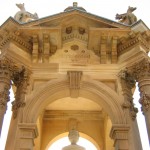 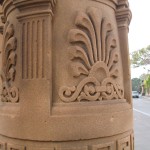 This is the second of two Frazer drinking fountains donated to the city by John Frazer MLC, a wealthy businessman and philanthropist. The fountains are both made of fine Pyrmont sandstone and were installed in 1881 and 1884 respectively. While both fountains were designed by City Architect Thomas Sapsord and sculpted by Mittagong sculptor Lawrence Beveridge, they are very different in style.

This fountain – the second – was erected in 1884 at the outer perimeter of the Domain on Mary’s Road (opposite the northern end of St. Mary’s Cathedral), where it remains today. Its Baroque style is very ornate and contrasts with the simple Gothic lines of the first Frazer Fountain, located in Hyde Park. Like its forerunner, this fountain features Pyrmont sandstone and specially imported Aberdeen granite in the water basins.

The dolphin taps and drinking cups that once featured have long since vanished but the high sheen of the granite basins remains. The original handrail surrounding the fountain has also been removed, though a section of it was still standing in 1983. Unlike the first fountain (which has had its taps and drinking cups replaced with a bubble fountain in keeping with changing attitudes towards health and hygiene) a resolution of the Council in 1936 to replace this fountain’s dolphin taps was not carried into effect.

The two Frazer fountains demonstrate aspects of daily life in the 19th century, particularly in relation to water supply and usage, and public health and hygiene. They are also an indicator of the philanthropy demonstrated by the wealthy living in the city at the time.

In the early 1880’s Sydney’s piped water supply was unreliable and largely restricted to the wealthy. Occasional crises in supplies of water were only abated after the completion of the Nepean system in 1888. Drinking fountains in public thoroughfares and parks were common. Hygiene standards were also far less stringent than today as illustrated by the use of communal cups that dangled at the sides of the basins. For philanthropists, the masonry of the fountains afforded a publicly visible space on which their name and good works could be recorded for posterity.

Both Frazer Fountains were designed by Thomas Sapsford and sculpted by Lawrence Beveridge. Sapsford served as City Architect for the Council of the City of Sydney between 1881 and 1885.

John Frazer’s gift to the city came at the end of a comparatively short, but eventful life. Born in Ireland in 1827 he arrived in Australia, penniless, in 1841, aged 14. Frazer set up his own wholesale grocery business in 1847. By the late 1850’s he had moved into partnership and larger premises, becoming a land speculator in the 1860’s and opening two large commercial premises in the city by the early 1870’s.

He had successfully undertaken a number of directorships. In1874, by the time he retired from his own business concerns, he was nominated to the NSW Legislative Council. His philanthropic activities were also wide-ranging by this stage, and included gifts to a variety of religious, cultural and educational causes.

The inscriptions are set high up, using raised lettering on a slab below the crenellations.

On the southern side: Presented/ by

On the eastern side: John Frazer/ M.L.C.

On the northern side: To His/ Fellow Citizens

On the rim of granite basin, on northern and southern sides: Aquarius

On the rim of granite basin, on eastern and western sides: Arethusa

On the base of the fountain, north-western corner: Thos. Sapsford/ City Architect

On the base of the fountain, south-western corner: L. Beveridge/ Sculptor

Major restoration works are programmed for 2015.