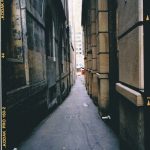 Food on the Table was a laneway artwork proposal by Simryn Gill for a unique meal to be shared within Abercrombie Lane, which would challenge society’s ideas about waste and consumerism. The unusual feast was to be prepared from discarded food and ingredients gathered by volunteers from bins and dumpsters.

Gill’s concept for the communal laneway meal was “a potlatch shared between those who make the rules and those who live outside them”. The guests were to include those who gathered and prepared the food, along with those who took part in the conversations and processes that made the meal possible, such as property developers and the City of Sydney Lord Mayor.

While the actual meal was never prepared, the discussions that took place and the steps that were taken to try and bring the concept to fruition formed a piece of participatory art of the type made famous by art critic Claire Bishop in her essays and 2012 book, Artificial Hells.

Those discussions took place among many levels and departments of the City of Sydney, as well as with organised “gleaners” and individual food professionals in the wider Sydney area.

Gill’s idea provoked detailed conversations about the possibilities and impossibilities of the project, including questions relating to the law, health, management and media – as well as broader questions of waste, redistribution, and the social boundaries of artistic ideas and actions.

By demonstrating the City of Sydney’s understanding of its responsibilities towards the public, and it’s difficult position in realising the proposal, Gill’s artwork was given a tangible outcome in the form of a brochure, Food on the Table by Simryn Gill, addressing legal and health implications.

Simryn Gill was born in Singapore and now shares her time between Sydney and Port Dickson, Malaysia. She works in sculpture, photography, drawing, and writing.

Gill has held numerous solo exhibitions in Australia, Malaysia, USA, India and Europe, and has participated in many major exhibitions including the Singapore Biennial in 2006, the Istanbul Biennial in 2011 and the Moscow Biennale in 2013. She also represented Australia at the Venice Biennale in 2013. Gill’s work features in numerous public and private collections worldwide.