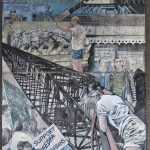 FEDFA Green Bans is one of eight murals painted on the railway pylons at Woolloomooloo, showing the history and people of this suburb.

It celebrates the role played by the Federated Engine Drivers and Fireman’s Association (FEDFA) in Woolloomooloo. Without their staunch support, residents may never have been able to save their suburb from destruction.

In 1973, Woolloomooloo’s people were locked in a desperate battle to protect their homes. The State Government had approved plans to clear out the working-class residents and replace their terraces with lucrative high-rise apartments and offices. With the might of both government and developers against them, the residents seemed doomed to fail..

When they turned to the unions, Woolloomooloo’s residents found the help they needed. Since FEDFA members included bulldozer and crane drivers, developers couldn’t demolish buildings or clear land without their labour. When FEDFA and the NSW Builders Labourers’ Federation agreed on a ‘green ban’ for the area in 1973, they brought all demolition and construction in Woolloomooloo to a grinding halt.

Residents refused to leave and, with the support of their unions, managed to save many homes. The Woolloomooloo Mural Project was conceived by activist artists Merilyn Fairskye and Michiel Dolk in 1982 to celebrate the suburb’s people and history.