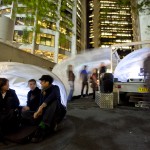 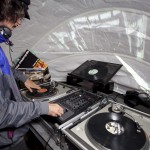 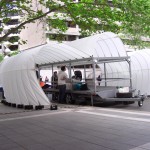 Under these conditions, exhibitions would no longer be switched on and off, in a spirit of tabula rasa, before the next hosted outing, but would take on an almost life-like, organic valence, leaving seeds to grow, sedimentation to accumulate.

Family Unit: Chill Trailer was a portable performance space created and activated by an extended family. A boat trailer transformed into an ever expanding platform, with a series of umbrella-like structures forming shelters above and around it.

The Chill Trailer sought to provide a new way to engage with space and people in the city. It operated with the dynamic and unpredictable variables of the city; a city that is never static, that never sleeps. This work was also constantly changing, a performance which used the city as some sort of laboratory.

The design of the trailer was inspired by diverse forms ranging from the expandable caravan to the nautilus shell. The base of the structure was a large trailer that opened up into a series of spaces where different events and performances could take place. In the daytime cooking and gardening workshops, at night a music station with D.J.s, dancing, impromptu performance and art events. On occasion it operated as a nightclub with DJ SpinFX and friends, on other occasions it became a ballroom, a chill-out space, a kitchen, a classroom, a garden.

The process involved in delivering this artwork was considered to be as significant as the product, much as the avant-garde artists of the previous generation had viewed their art and exhibitions, as if the various locations which hosted the exhibition were laboratories or workshops.

Historical precedents cited for this process of working include the Situationist International, Fluxus, and Gutai movements and the art practices of Joseph Beuys and Nam June Paik. Contemporary precedents include the relational aesthetics movement and art practices including Rirkrit Tiravanija and Thomas Hirschorn.