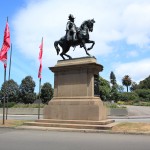 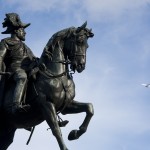 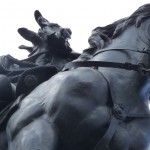 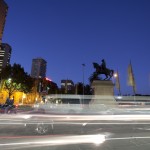 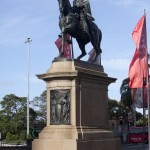 This bronze statue features King Edward VII in uniform on horseback. It stands on a sandstone plinth featuring relief panels showing allegorical figures. It is located on the corner of Macquarie and Bridge Streets, opposite the Conservatorium of Music.

King Edward VII, eldest son of Queen Victoria died, on 6 May 1910 after a short illness and a relatively short reign from 1901 to 1910. His death was widely reported in Sydney newspapers as an abrupt termination of an active reign and Sydney was described as a city in mourning.

The memorial statue was unveiled on Empire Day, 24 May 1922. Local newspapers proudly hailed the monument as an expression of the significance of the empire. This was clearly portrayed by one of the bas-relief panels on the statue’s pedestal, featuring allegorical figures with clasped hands and carrying the inscription ‘Empire and Unity’.

Thomas Brock (1847-1922) was one of Britain’s most prominent sculptors of the era. He is best known for his public monuments and statuary in London, especially the Victoria Memorial Buckingham Palace. Although schooled in the classical tradition he successfully made the transition to the ‘New Sculpture’ circa 1900. Brock was elected an associate of the Royal Academy in 1883 and full member in 1891. In 1911 Brock received a knighthood.

Within a few days of King Edward’s death a proposal was presented to the Lord Mayor of Sydney for the erection of a memorial to the late King in the soon-to-be constructed National Capital. This proposal, however, came to nothing, and it was another 12 months before the first steps were taken towards erecting the memorial in Sydney.

The initiative for a memorial fund came from the Sydney Chamber of Commerce and the Highland Society of New South Wales. It was funded by public subscription and contributions from the City of Sydney and the State Government. The King Edward Memorial Committed decided to locate the statue at the entrance of Hyde Park and plans were made to remodel Queen’s Square. However the outbreak of World War 1 made it impossible to have the statue cast or the grand upgrade realised.

Following the end of the war, the Committee attempted to revive interest but the final result was in a less grand scale. It also included the difficult task of finding a new location for the statue, which arrived in Sydney before a site was secured in Bridge Street, slightly to the west of where it stands today.

On the northern and southern sides of the pedestal, an inscription reads: King Edward VII / 1901-1910

On the relief panel, western side at the front of statue, it reads: Empire / Unity

On the relief panel, eastern side at the back of statue, it reads: Peace / and / Progress

On the eastern side of the pedestal, it reads: Erected 1922