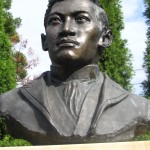 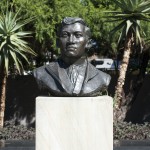 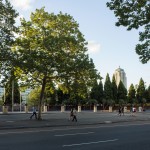 This large bronze bust of Dr Jose Protacio Rizal on a striated sandstone plinth is located in Plaza Iberoamericana on Chalmers Street, and faces east towards the Sydney Dental Hospital. Dr Protacio wears a collared coat over a collared shirt and a frilly tie.

The bust occupies the entire base of the plinth. It is one of a series of busts of famous Latin American heroes on display in Plaza Iberoamericana commemorating the contribution of Spanish and Portuguese speaking people to the history of Australia. The bust was a gift to the City of Sydney from John Holland (Philippines) in 1995.

Dr. José Protacio Mercado Rizal y Alonzo Realonda (1861–1896) is the national hero of the Philippines, where the anniversary of his death, December 30, is now a holiday. He was a poet and multilinguist as well as an amateur architect, artist, educator, amateur economist, amateur ethnologist, scientific farmer, historian, inventor, journalist, mythologist, internationalist, naturalist, novelist, ophthalmologist, physician, propagandist, sculptor, and amateur sociologist.

Rizal advocated reform by peaceful means rather than by violent revolution. In this sense, he was Asia’s first modern non-violent proponent of political reforms, and a forerunner of Gandhi. He helped create a new climate of thought throughout Asia, leading to the attrition of colonialism and the emergence of new asiatic nations by the end of World War II.

The colonial authorities in the Philippines did not favor these reforms, even if they were more openly endorsed by Spanish intellectuals like Morayta, Unamuno, Pi and Margal. Upon his return to Manila in 1892, Rizal formed a civic movement called La Liga Filipina. This league advocated these moderate social reforms through legal means, but was disbanded by the governor. At that time, he had already been declared an enemy of the state by the Spanish authorities because of his incendiary novels.

An plaque on the sandstone plinth reads: “DR JOSE PROTACIO RIZAL / (1861-1896) / NATIONAL HERO OF THE PHILIPPINES / BORN ON 19 JUNE, 1861 AT CALAMBA, LAGUNA, / AND DIED AS A MARTYR ON 30 DECEMBER 1896 / DR RIZAL WAS THE FIRST TO INSPIRE FILIPINOS / TO REGARD THEMSELVES AS A NATION AND TO / CHERISH THE PHILIPPINES AS THEIR FATHERLAND / HE WROTE TWO INSPIRING NOVELS, / NOLI ME TANGERE AND EL FILIBUSTERISMO / A GIFT TO THE CITIZENS OF SYDNEY FROM / JOHN HOLLAND (PHILIPPINES) 1995 / SCULPTOR: HALDANE HOLMAN (A.S.T.C)”