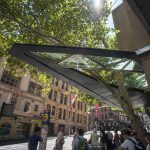 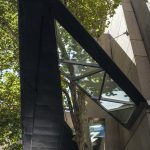 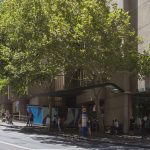 My concept is driven by the site, materials and a commitment to the pedestrian. The shape is distinctive, timeless and elegant. Critical to the idea is that here is an urban element designed and built to stay. It melts into the building, while being intriguing enough to be remembered.

Dorsal Wing is an artwork designed to function as a pedestrian shelter for the Druitt St bus stop and café at Town Hall House.

The design of the shelter had to meet a complex set of challenges, including: the narrowness of the street and walkway, preservation of two mature trees, the need to minimise obstructing pedestrian access at the busy location, and a requirement to channel rain run-off into Sydney’s stormwater system rather than onto the street.

The design also needed to respect the surrounding architecture. It achieves this by using materials, such as bronze panels and stainless steel, endorsed by the original architect of Town Hall House, Ken Woolley.

Richard Goodwin’s design is based on the structure of airplane wings. The triangular structure, which is suspended by stainless steel poles from the concrete wall of Town Hall House, has been carefully shaped to accommodate the trunks of two existing plane trees.

The majority of the shelter is formed from dark bronze panels covering a stainless-steel frame. Two sections of the shelter are formed from glass, to admit light, and here the prosthetic effect of the artwork protruding from the building can be clearly seen.

Resembling a dorsal fin and a wing, as indicated in the work’s title, the awning is set high above the street, to avoid obscuring the view from the site down towards Darling Harbour.

Richard Goodwin has been an exhibiting artist since 1974, and has displayed his work in more than 30 solo exhibitions. He is a qualified architect and professor at the faculty of Art and Design, University of NSW, where he runs the Porosity Studio, a special interdisciplinary course for postgraduate students that centres on the critical investigation of contemporary urban space.

Goodwin is the principal of Richard Goodwin Pty Ltd, which works primarily on public space projects and the adaptive re-use and transformation of existing buildings.