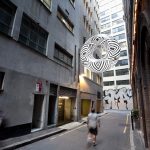 Donut was a large inflatable PVC sculpture with a black and white matrix design on its surface. The artwork was suspended one storey above Bridge Lane, by wires fixed to the walls of the buildings on either side of the laneway.

The graphic style of the artwork’s surface was derived from a traditional Wiradjuri design, which the artist often uses in his work. The artwork’s silhouette was intended to present a familiar form in an unfamiliar context. Transformed into a striking, black and white, hard-edged object, Donut encouraged viewers to imagine an everyday object in a different light.

The spherical form of the artwork is referenced in many cultures. In European and Indigenous cultures it is an ancient religious design used to depict time travel and healing. Israeli physicist Amos Ori designed a time machine in the same shape, and the form also echoes the circular branches of Aboriginal magic trees.

In using the donut shape, the artist also brings to mind contemporary pop-culture: a ‘pie in the sky’, something unattainable yet delicious.

Andrew specifically chose Bridge Lane for his artwork because of the laneway’s colonial architecture, and its history as the site of a convict lumber yard. The artist used his Wiradjuri heritage to remind viewers of the darker side of colonial history, in particular the treatment of Indigenous people and convicts.

The artist’s goal with this work was to challenge cultural and historical perceptions and to comment on both local and global issues regarding race.

Brook Andrew was born in Sydney, and shares his time between Melbourne and Paris.

Andrew works in a range of disciplines, including installation, performance and museum intervention. He has been exhibiting since 2000, with solo exhibitions in Melbourne, Sydney Brisbane, Perth and Hobart, as well as in New Zealand, France and The Netherlands.

He has participated in numerous group exhibitions at galleries and museums across Australia, Asia and Europe, and represented Australia in the Echigo-Tsumari Triennale in Japan (2012). Andrew’s work is represented in collections across in Australia, and in the National Museum of Contemporary Art in Seoul.