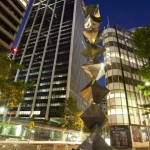 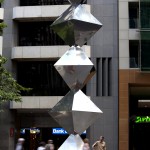 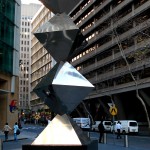 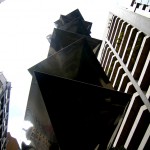 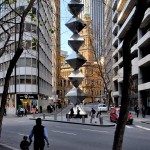 The Dobell Memorial sculpture commemorates one of Australia’s most celebrated landscape and portrait artists. Australian painter William Dobell was born in Newcastle, New South Wales on 24 September 1899.  He became an architect in 1916 and later moved to Sydney to study at the Julian Ashton Art School.

The Sir William Dobell Art Foundation was formed in 1971 from the artist’s bequest, for the benefit and promotion of art in NSW. In 1976 the Foundation commissioned eleven prominent Australian sculptors to submit maquettes for a Dobell Memorial Sculpture to be sited in Martin Place.

The judging panel unanimously recommended the work by Flugelman.

The Dobell Memorial Sculpture was presented to the people of Sydney on 15th October, 1979 and was originally installed in Martin Place. The sculpture was moved to its present position in October 1999.

Herbert ‘Bert’ Flugelman was born in 1923 in Vienna, Austria and arrived in Australia in 1938. From 1948 to 1951 he studied at the National Art School in Sydney and later taught at the South Australian School of Art and the University of Wollongong.

Flugelman is best known for his geometric and monumental stainless steel sculptural work. It was concerned with ‘Platonic Solids’ and featured cones, spheres and pyramids arranged in coherent lines. Flugelman died on 26 February 2013.

The Dobell Memorial sculpture was presented to

the people of Sydney by the Sir William Dobell Art Foundation

Originally located in Martin Place the sculpture was installed in its