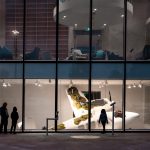 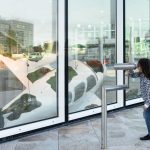 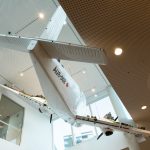 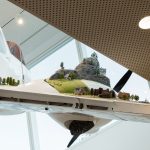 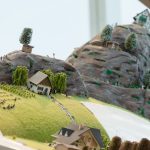 A repurposed vintage aircraft will be suspended inside the library with its surface transformed into a meticulously crafted miniature world.

Cloud Nation is a playful, enchanting and imaginative artwork referencing multiple themes including fictional narratives, migration and the cultural exchange made possible by air travel. It takes the notion of the inner homeland people carry within, turning it into a fantastic vision.

Small-scale model elements will reference themes of migration and fantasy on the Beechcraft Travel Air, recalling the fictional island of Laputa from Jonathon Swift’s classic novel Gulliver’s Travels. Laputa is a flying island inhabited by people with a love of learning and culture.

People will be able to engage with the artwork from different points, including monoculars provided in the plaza to view the plane in close detail from outside the library.

The work is due to officially launch with the Green Square Library and Plaza in late 2018.

Claire Healy and Sean Cordeiro are artists who reclaim and transform the fallout of consumer society in their practice. Combining a playful sense of humour and an engagement with art historical precedents, their work is characterised by the deconstruction and reinvention of prefabricated structures and the assemblage of accumulated objects into extraordinary sculptures and installations.

Healy and Cordeiro’s practice reflects a preoccupation with the dynamics of global mobility-the networks, standards and financial systems that enable and restrict the movement of people and goods in the modern era. Creating tensions between order and disorder, their works are shaped by traditional sculptural concerns such as mass, form and scale, however they also incorporate the expressive potential of motion, speaking to the way things move and change over time.

Healy and Cordeiro are represented by Roslyn Oxley 9 Gallery, Sydney.

The Green Square Town Centre will have a role as the heart of an evolving inner-city region.

The City is responsible for several major projects in and around the town centre.

The integration of artworks is a priority to ensure an engaging and vibrant place for the local and new Green Square residents, workers and visitors.

Before being elected as a Councillor of the City of Sydney, Jess Scully was engaged as the Green Square Library and Plaza Curatorial Adviser.