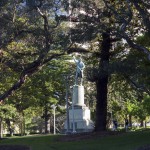 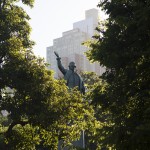 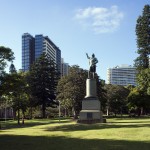 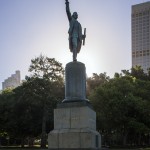 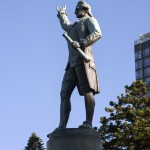 This larger than life size bronze figure shows Captain James Cook holding out a telescope in his left hand with his right hand extended upward. Located in the south of Hyde Park, the sculpture stands on a Moruya Granite pedestal. The work was commissioned on the 26th of September 1874, and officially unveiled to the public on the 25th of February 1879.

Thomas Woolner (1825-1892) was born in Hadleigh, Suffolk, and studied at the Royal Academy. He was the only sculptor as founding member of the Pre-Raphaelite Brotherhood and had a successful career as a sculptor. Woolner travelled to Australia in 1852, and went on to have limited success on the Victorian goldfields. In 1854 he visited Sydney, where he was unsuccessful in gaining a commission to create a statue of Wentworth. He returned to England shortly thereafter, and was made a full member of the Royal Academy in 1874.

The Captain Cook sculpture was erected by public subscription, which was supplemented by government grants. Interest in erecting a statue of Cook, the first English navigator to come across the east coast of Australia, had been expressed for over a decade.

The foundation stone was laid in 1869 but erection of the statue was beset by difficulties, not least a shortfall in subscription funds. Eventually, it seems, the Colonial Secretary, Sir Henry Parkes, took the matter into his own hands. In a letter dated 26 September 1874 to Thomas Woolner, Parkes requested that the well-known and prolific sculptor send a design of the statue for approval, with particulars of size and material, and the probable time required for execution. Parkes’ only major directive was that since the ‘position in Hyde Park is a very exposed one…the statue must be of bronze’.

In 1878, the ‘colossal’ statue of Captain Cook was briefly displayed ‘in the open space nearly opposite the Athenaeum Club, in Waterloo Place, Pall Mall’, before being shipped to Sydney. It was described in the British Art Journal of the time as “unquestionably a work designed with force and spirit that raise it to the character of the sensational”.

The day of the sculpture’s unveiling was declared a public holiday in honour of Cook and the monument. It was estimated that 12,000 joined the procession to Hyde Park and 60,000 people attended the unveiling.

Inscriptions on the front face (northern side) read: Captain Cook/ This statue was erected by public subscription / assisted by a grant from the new south wales government./ 1879

On the western side: BORN/ AT MARTON IN YORKSHIRE/ 1728

On the southern side: DISCOVERED THIS TERRITORY/ 1770

On the eastern side: KILLED AT OWHYHEE/ 1779

This statue was erected by public subscription

assisted by a grant from the new south wales government

AT MARTON IN YORKSHIRE