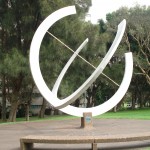 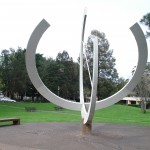 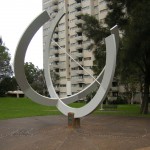 The Sundial installed in 1970 and made by Sundials Australia commemorates the Bicentenary of Captain James Cook’s landing at Botany Bay. The large cement and pebblecrete sundial made of hollow steel and painted white is at the centre of a circular pebblecrete area with seating around its perimeter and can be found on Raglan Street, Waterloo. Embedded in a circular base is a stylised map of Australia and New Zealand documenting the route of the Endeavour. The east-west arm of the sundial has raised numbers and periods representing the time. A metal bar extends from the north arm to south arm and the shadow cast indicates the time.