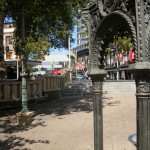 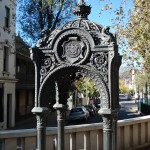 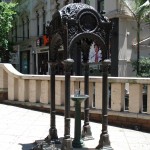 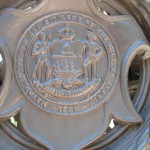 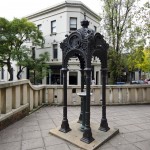 The Oxford Square Canopy Fountain features a metal stemmed dish drinking fountain in the manner of a champagne goblet, from the centre of which rises a drinking bubbler. The original iron tap and circular water trough have been removed. This is enclosed by four fluted columns supporting a richly decorated dome, with pie crust edged arches, lion head crockets and surmounted by a crown finial. The inscription is on two shield forms integral to the dome structure.

This drinking fountain was intended to commemorate the previous existence of pumps along Busby’s Bore which runs directly beneath the Oxford Square site. At various locations along the route of Busby’s Bore, hand pumps existed which were used to fill water carts which then distributed water to individual residents. The 1857 canopy fountains were cast in thirty separate components.

A similar canopy fountain exists at Beare Park and Green Park. There is also one which is very similar, the Munro Fountain at Machattie Park at Russell and George Streets in Bathurst, NSW.

Whosoever drinketh of this water shall thirst again.

But whosoever drinketh of the water that I shall give him shall never thirst.