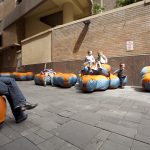 Soft, colourful and inviting, Bubbleway provided both a visual and a tactile contrast to the harsh lines and hard surfaces of the typical urban landscape. It was designed to introduce features not often found within inner city public spaces: large, pillowy spaces, suitable for lounging and relaxing.

The Bubbleway modules were portable and flexible, so they could be moved, stacked and grouped to encourage play and creativity, promote interaction between large groups, or host intimate conversations.

Once home to publishing houses and artist studios, Bulletin Place was a place of bustling creative interaction. With Bubbleway, Rebar sought to recall that time, providing a space for social interaction as well as a place of respite for workers from the surrounding area – inviting the citizens of Sydney to ignore the usual rules of urban spaces and interact in new, informal ways

Rebar was an art and design studio based in San Francisco, founded by John Bela, Matthew Passmore, and Blaine Merker. Rebar “set out to imagine opportunities to redefine and reimagine the world around us, and our relationships with our fellow human beings.”

Rebar operated at the intersection of art, design and activism from 2004 – 2014, and the creation of flexible, adaptable streetscape projects like Bubbleway was a central thread in its art and design practice.

Rebar’s work was exhibited at the 2008 Venice Architecture Biennale, and at numerous architectural institutes, arts centres, universities and design schools across USA and Canada.

Curated by Amanda Sharrad and Justine Topfer, it invited renowned Australian and international artists to breathe new life into the ordinary.

Creating spaces where passers-by could pause for private reflection, or engage in lively cross-cultural dialogue about art and its intersection with public life