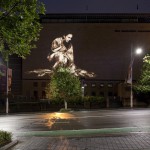 The blank, windowless wall of the Australian Museum on William Street was transformed with an original film work, born in darkness before dawn by Nicole Foreshew. The projections went live nightly for a 3 month period, from 20 November 2013 – 20 February 2014.

Larger-than-life images of Aboriginal women were projected onto the 20-metre façade of the Museum to celebrate the importance of Sydney’s Indigenous history and culture. The film combines slow movement and still imagery in a muted, sepia-rich architectural projection, approximately three hours in duration.

The film features women draped in cloth imbued with traces of mineral and plant specimens. The cloth was dyed with bark and leaves, found in gutters, water drains and at the base of trees. It was thus infused with design elements referencing the growth and structure of plant organisms and remains.

The work explores the Aboriginal concept of place, tracing personal histories and connections to communities. Women, family, friends and people the artist knows, from Sydney and Western Sydney, were invited to place themselves into the cloth. These are women have impacted on Foreshew’s understanding of ‘place’.

The cloth is illuminated to emphasize the transition of space, as it is always moving between social relationships, revolving around people occupying, owning, seizing, developing, losing or transforming a space.

Nicole Foreshew is a Sydney-based, Wiradjuri artist. Her current artistic practice involves environmentally sustainable plant materials and minerals which are used to permeate objects for performance.

Foreshew’s grandfather was born on the banks of the Bogan River in Peak Hill. Her grandmother and great grandmother are from Dubbo, located in Central West New South Wales. The Australian Museum has 11 objects and one carved tree from Peak Hill. The Museum’s Mineralogy and Palaeontology collection include Talbragar fossils, a Jurassic Period site from Central West New South Wales near Gulgong.

Recognition in the Public Domain is one of the four key components of the Eora Journey.

It aims to reactivate the knowledge of specific places and events in Aboriginal history at key sites within the city.