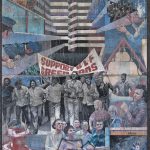 BLF Green Bans is one of eight murals painted on the railway pylons at Woolloomooloo, showing the history and people of this suburb.

This mural commemorates the role played by the NSW Builders’ Labourers’ Federation (BLF) in helping the people of Woolloomooloo save their homes. Without the union’s ‘green bans’, which meant that no union member would work within the suburb, residents may never have won their battle against rampant development.

At that time, the BLF was led by Jack Mundey, Joe Owens and Bob Pringle – strong communist party activists who believed in ‘ethical labour’ and who knew how much impact their work could have on society and the environment.

When the people of Woolloomooloo reached out to them for help, the BLF came to their defence. At the residents’ request, the BLF placed a green ban over the entire suburb in February 1973. Because of their actions, the State government was eventually forced to shelve its plans for large-scale high-rise redevelopment in Woolloomooloo. 65% of the existing buildings were saved for public housing.

The top of this mural shows the politicians, developers and bankers behind the scheme to redevelop Woolloomooloo. But it’s the power and determination of the union men that dominate this scene.

BLF Green Bans is a powerful record of union action that was the first of its kind in the world. It was painted using details drawn from historical records, newspapers, archives, photographs and the personal memories of the local community.