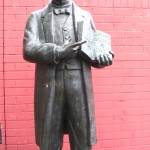 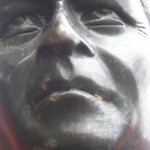 This statue of former President of Mexico, Benito Juarez, is made from bronze and stands approximately two metres tall standing upon a sandstone plinth. It is part of a series of busts of famous Latin American heroes on display in Plaza Iberoamericana commemorating the contribution of Spanish and Portuguese speaking people to the history of Australia.

Benito Juarez was born in the Zapotec village of San Pablo Guelato, Oaxaca on 21 March 1806. His parents died when he was three years old. In 1827 he graduated from the seminary of Santa Cruz and entered the Oaxaca Institute of Arts and Sciences the following year. In 1831 he qualified to enter a local law office while also beginning a career as an anti-establishment liberal politician.

In 1831 Juarez was elected an alderman on the Oaxaca town council. His legal career often involved serving as the representative of impoverished Indian communities in their struggles to protect their land-holdings. He was exiled to Havana and New Orleans in 1853 but when the liberals assumed power in 1855 with Juan Alvarez as president, Juarez became minister for justice.

In 1860 the people elected him as President. His government guaranteed free speech, free press, the right of assembly and the abolition of special legal privileges. He died on 18 July 1872 at his desk while still President but is well remembered as one of the greatest Mexican statesmen. He fought for and established a liberal constitution and stubbornly saved the country from foreign domination.

The bust was created by Heriberto Juarez, a renowned Mexican sculptor.

The statue was presented to the City of Sydney in August 1988 by the Mexican Embassy as a gift from the Republic of Mexico. It was unveiled on 4 February 1989.

An plaque on the sandstone plinth reads: “Benito Juarez / (1806-1872) / Mexican statesman and resistance leader against the / French occupation. After defeating the puppet emperor / Maximillian, Juarez instituted numerous liberal / reforms as President of Mexico. / His government guaranteed free speech, free press, / right of assembly and equality before the law.”