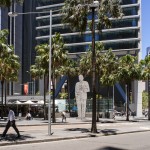 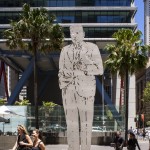 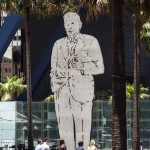 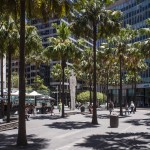 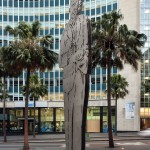 The pose I have chosen is typical of Chifley’s’ relaxed style. Rumpled suit, hand in pocket, the other grasping the bowl of his ever-present pipe. This pose belies the monumentality of the statue and severity of its internal structure and stainless steel surface.

Pedestrians walking up the Phillip St hill or coming from Martin Place will see this statue as a giant billboard, a perforated architectural slab that mediates between the scale of the architecture and that of the human body.

A large statue of former Prime Minister, Ben Chifley, made from two flat sheets of stainless steel. Chifley is depicted in a cartoon-style drawing, standing with one hand in his pocket and the other holding a pipe. The statue stands 2.3 metres tall and is bolted to a block on concrete. It is located in the forecourt of Chifley Tower in Chifley Square, on the corner of Phillip and Hunter Streets, Sydney.

Joseph Benedict Chifley was the Prime Minister of Australia from 1945-49. He also served as Federal Treasurer from 1941-49.

Artist, Simeon Nelson, said this about the artwork: “The statue melts into its urban environment. The perforations undermine the heaviness of the material, turning structural steel into a gravity defying filigree, merging matter with the air and light around it. Viewed from edge on the figure disappears in an ordered vertical tangle of zigzag trussing. This is a deliberate play off between an internal utilitarian structure that supports an external figurative icon like the old steel billboard frames that can be seen rusting on building rooftops, and an external message bearing skin. This is reversed in the statue as the frame and external skin are structurally interdependent.

“This particular structure carries the likeness of Prime Minister Joseph Benedict Chifley and is derived from a small grainy photo of him posing for a group portrait with members of Atlee’s British cabinet in 1947. A pivotal and largely forgotten figure, Chifley was responsible for post-war reconstruction, initiating many policies and projects that helped define modern Australia including immigration and multiculturalism, the founding of the CSIRO and The Snowy Mountains Scheme amongst others.

“This memorial plays with the absurdity of pushing a certain version of history as innumerable Lenins, Stalins, and Maos did. Visions of headless Lenins and toppled Stalins in the rupture of the Soviet Union inform my approach as much as the Winged Victory of Samothrace in the Louvre and the Big Merino at Goulburn. There are also Modernist echoes and resonances including Brancusis’ Endless Column, 1937 and Richard Serras’ Sight Point 1972-75.

Simeon Nelson was born in England in 1964 and arrived in Australia in 1967. He studied at the National Art School in 1984 and completed a Bachelor of Visual Art (sculpture major) at the Sydney College of the Arts in 1987. In 1990, he completed a Sculpture (Post-technician) Certificate at East Sydney Technical College. He has exhibited widely since 1988 and is the recipient of numerous awards and residencies.

“I try to think of the labour movement, not as putting an extra sixpence into someone’s pocket, / or making somebody Prime Minister or Premier, but as a movement bringing / something better to the people, better standards of living, greater happiness to / the mass of people. We have a great objective – the light on the hill – which we aim / to reach by working for the betterment of mankind not only here but anywhere / we may give a helping hand.” / Joseph Benedict Chifley 1885 – 1951 / Prime Minister of Australia 1945 – 49 / Federal Treasurer 1941 – 49″.

I try to think of the labour movement, not as putting an extra sixpence into someone’s pocket,

or making somebody Prime Minister or Premier, but as a movement bringing

something better to the people, better standards of living, greater happiness to

the mass of people. We have a great objective – the light on the hill – which we aim

we may give a helping hand.