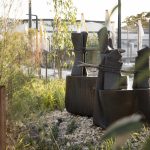 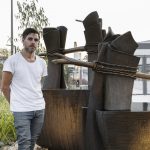 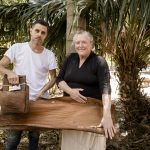 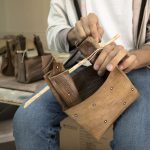 “Aboriginal people right the way across the country are very ecologically minded. They know about everything that grows in their country, about their qualities and how we make our traditional implements with the things that nature already provides. It’s about absolutely knowing your place, and the bangala is just one example of thousands of things that we used.” Aunty Julie Freeman

“When we think about those ancestral stories, they’re larger than life. They’re these big stories that tell us about where we belong, and where we fit.” Jonathan Jones

The site-specific art installation is made up of 2 oversize bronze cast bangala, or Eora bark water carriers, as part of a garden setting.

The public artwork concept was integrated into the centre’s design from the start of the planning stages. It has been created in close collaboration between the artist, architects and landscape architects, along with Aboriginal Elders and heritage consultants.

Bangala is based on the bangala, an Eora vessel. Customarily made from bark or the frond of a Bangalow palm, bangala are handheld containers used for carrying and maintaining fresh water in coastal environments, and are shared up and down the east coast of Australia. Today, several key Aboriginal traditional owners, including Aunty Julie Freeman, continue to hold the knowledge for how to make bangala. This artwork speaks of the enduring presence of Eora culture within country and of the continued importance of water on this site.

The underlying land of Green Square was originally a series of sand dunes and swamps that led into the Cooks River and beyond, into Kamay or Botany Bay. But in the early 1900s many parts of these wetlands were drained to make way for water-reliant industries. Today, Gunyama Park retains its aquatic memory, with large drainage systems still passing under the site. Gunyama Park Aquatic and Recreation Centre recalls the traditional landscape, returning the site to a place of water and recreation.

Aunty Julie Freeman is a Gorawarl/Jerrawongarla traditional owner for South Sydney and the South Coast of New South Wales. She is a recognised artist, cultural leader and storyteller, with strong knowledge relating to the region’s environmental system.

Artist Jonathan Jones is a member of the Wiradjuri and Kamilaroi nations of south-east Australia, and is based in Sydney. He creates site-specific installations and interventions to explore Indigenous practices, relationships and ideas.

Aunty Julie and Jonathan have exhibited and worked together for many years.

Bangala is one of several artworks for Green Square, as part of the City of Sydney’s Sustainable Sydney 2030 and City Art strategies. It joins other artworks enjoyed by residents and visitors to Green Square including While I Live I Will Grow by Maria Fernanda Cardoso and Cloud Nation by Claire Healy and Sean Cordeiro.

Public art is integral to the vibrant and diverse character of this evolving area and aims to actively encourage people to observe and think about their environment.