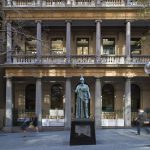 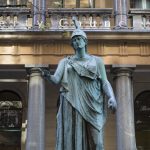 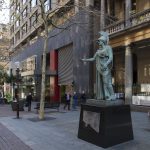 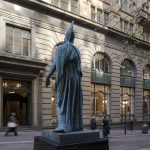 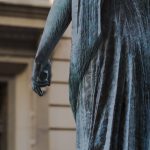 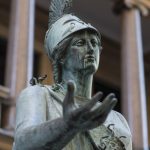 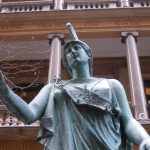 Though best known as the goddess of courage, wisdom, strategy and war, Athena also represents law and justice, civilisation, arts and crafts, and skill and inspiration.

The figure stands in a solemn and graceful pose, with her right hand outstretched and her open palm upwards. She is dressed in a loose and flowing peplos (robe) that covers her whole body, leaving only her arms and feet exposed. There is an aegis (goat-skin cloak) across her chest with the face of the Medusa in the centre. She wears a tall Corinthian helmet on her head, decorated with the figures of owls and gryphons.

The statue is modelled on the fourth-century bronze statue of the goddess Athena found in Piraeus in 1959, (known as the Piraeus Athena) which is now on display at the Piraeus Archaeological Museum in Greece.

Athena was given to Sydney by the Mayor of Athens as a symbolic gift during the Sydney Olympic Games.

A plaque fixed to the statue’s black marble plinth states:

Offered by the mayor of Athens Dimitris l. Avramopoylos to the Lord Mayor Frank Sartor and the City of Sydney September, 2000.