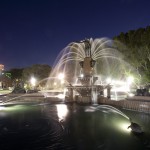 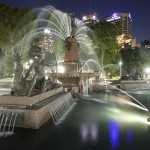 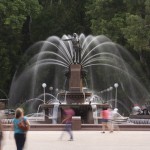 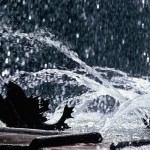 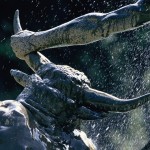 The Archibald Fountain is located in Hyde Park North at the centre of ‘Birubi Circle’, and at the intersection of the main avenues crossing Hyde Park. The fountain, by French sculptor Francois Sicard, commemorates the association between Australia and France in World War 1. It draws its themes from Greek antiquity and is an important example in Sydney of the classical revivalist sculpture of the 1920’s and 1930’s, known as Art Deco.

The fountain is approximately 18 metres in diameter and is in the shape of a hexagon. A bronze Apollo, the central raised figure standing approximately six metres high on a central pedestal, dominates the other mythical figures of Diana, Pan and the Minotaur. Behind Apollo a large arch of fine spray represents the rising sun and accentuates his dominant position. At Apollo’s feet, water sprays from horses’ heads into a series of three basins. Tortoises in the large hexagonal basin, and dolphins in the middle one, direct jets of water towards the centre.

Sicard chose a mythical theme to express his message through the medium of a fountain. Although commissioned to honour the association forged in war, the work was also to look forward to peace and Sicard allowed the peace theme to dominate. Central to his design was Apollo giving life to all nature. Apollo was surrounded by three groups of figures, the first featuring Diana bringing harmony to the world; the second, Pan watching over the fields and pastures; and the third, Theseus conquering the Minotaur, symbolic of sacrifice for the common good.

Francois Sicard (1862-1934) was a distinguished artist, renowned in France and beyond. He studied with Louis-Ernest Barrias and Felix Laurent and was best known for work on the adornments of the Louvre. Sicard won the Premier Grand Prix de Rome in 1891 and was awarded a gold medal at the Exposition Universelle of 1900. He became and Officier of the Legion d’Honneur in 1910.

Sicard became an influence for change among young Sydney sculptors of the 1930’s, after the erection of the Archibald Fountain, by providing an imposing example of the new Art Deco style in architecture.

In 1919, a bequest in the will of J. F. Archibald, founding editor of the Bulletin, provided for the erection in Sydney of a symbolic, open-air memorial. As directed in Archibald’s will, this was to commemorate the association between Australia and France during World War 1, ‘for the liberties of the world’ and was to be sculpted in bronze by a French artist. Archibald’s expressed preferences came not from his French lineage, as some erroneously thought, but from an acquired interest in modern French culture, which he admired for its ‘clarity of thought and resourceful originality’.

Archibald stipulated that the money be invested for seven years before work began on the memorial. Francois Sicard was selected as sculptor for the memorial in July 1926 after a series of interviews in Paris by the President of London’s Royal Academy.

The figures sculpted in bronze by the lost wax process, took several years to complete but they were ready for display in Paris at the Grand Palais in May 1930, before being sent to Australia. The display was greeted with enthusiasm and praise both in Paris and London. The fountain was handed over to the City of Sydney on 14 March 1932, following delays caused by customs duty, and is integral to the design of Hyde Park.

The primary inscription reads: The Archibald Memorial Fountain / A gift to the Citizens of Sydney / under the will of the late J. F. Archibald / 14th March, 1932. Alderman S. Walder / Lord Mayor of Sydney.

A tablet attached to the large base supporting the figure of Theseus reads: This fountain is the gift of the late / J.F. Archibald / to his fellow countryman and is intended in terms of / his will to commemorate the association of Australia / and France in the Great War 1914-1918. It was erected in / 1932 and is the work of Francois Sicard, Sculptor, Paris.

An inscription on the St Mary’s Cathedral side reads:

Apollo represents the Arts (Beauty and Light.) Apollo holds out his right arm as a sign of protection and spreads his benefit over all nature while he holds a lyre in his left hand. Apollo is the warm which vivifies, giving warmth to all nature.

At the touch of his ray men awake, trees and fields become green, the animals go out into the fields and men go to work at dawn. At Apollo’s feet the Star of Day is indicated by a semi-circle of which the rays spread out in jets of light (the rising sun). The horse’s heads represent the horses of Apollo’s chariot. Out of the nostrils, water falls into the first basin, to fall there into the second and run away into the large basin.

The large basin is decorated with six tortoises which throw jets of water. The large basin is divided into three groups; one represents Diana, goddess of purity, of peaceful nights, symbol of charity: the ideal which watches over mortals-all that stands for poetry and harmony.

The Pan group symbolises the good things of the earth-it is the ‘Young God of the fields and pastures and of the countryside’. The third group represents sacrifice for the public good. Theseus vanquisher of the Minotaur. The spirit triumphs over bestiality.

Theseus delivers his country from the ransom which it had to pay to this monster. It is the sacrifice of himself for the good of humanity. Between these groups dolphins throw jets of water.

Extensive preservation work was undertaken by the City of Sydney in 2013.

The Archibald Memorial Fountain. A gift to the Citizens of Sydney under the will of the late J. F. Archibald. 14th March, 1932.

This fountain is the gift of the late J.F. Archibald to his fellow countrymen and is intended in terms of his will to commemorate the association of Australia and France in the Great War 1914-1918. It was erected in 1932 and in the work of Francois Sicard, Sculptor, Paris.