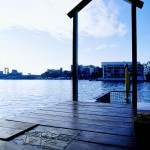 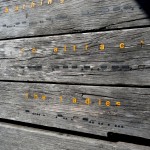 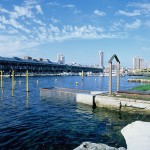 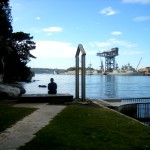 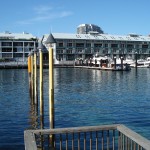 Mrs Biggs even had a bathing machine to attract the ladies

The Archaeology of Bathing by Robyn Backen reflected upon the history of bathing at Woolloomooloo Bay. The installation traced elements of the former Domain Baths for Ladies opened by Mrs Biggs in 1833, and recalled cultural attitudes in the new colony and the closeted modesty associated with the early days of bathing.

Woolloomooloo Bay has a long association with bathing. Gadigal people bathed here prior to and after European settlement, and it is along this shore that Sydney’s first baths were built. Since the first European settlement in Sydney there have been eleven different bathing establishments in Woolloomooloo Bay. Between 1883 and 1955 this part of the bay was the site of four separate ladies bathing establishments, including Mrs Biggs’ Ladies Baths and the Domain Baths for Ladies.

In The Archaeology of Bathing a concrete path defined the poolside deck and changing cubicles. Steel steps lead down from an entrance frame on the shoreline to a cage-like structure representing the old bathing machine, used to protect ladies from sharks and the attention of men while they bathed. The naval presence in Woolloomooloo Bay was signified by Morse code messages in lights around the entrance frame, triggered by people approaching the site.

A floating jetty led out from the cage to navigational cardinals marking the perimeter of the original baths. The tidal movements of the jetty also drew our attention to the littoral – the slippage between high and low tide – which is an important element within the conceptual framework of the artist’s overall practice.

Robyn Backen is an interdisciplinary artist based in Sydney. She studied sculpture in Amsterdam and Salzburg under Marcus Lupertz and Edvardo Paolozzi. Backen’s sound, lightworks, projections and computer generated systems include the audience and actively engage with the spaces in which they inhabit. Her installations are often technologically complex yet are minimal in appearance. Systems become the subjects of her work, like those of language and code, classifying and remembering.

Inscription in text and Morse code on the timber plaque:

Mrs Biggs / even had a / bathing machine / to attract / the ladies

Archaeology of Bathing / Robyn Backen / The Woolloomooloo Bay shoreline has a long association with bathing. It was / used by the Cattigal people prior to and after European settlement and it is / along this shore that Sydney’s first baths were built. These baths nurtured / some of Australia’s greatest swimmers. Between 1833 and 1955 this area of / the bay was the site of four separate ladies bathing establishments – including / Mrs Biggs’ Ladies Baths and the Domain Baths for Ladies. / This artwork traces the perimeter of the former Domain Baths for Ladies. The elements form a collage / a floating jetty evokes the memory of the boardwalk and marks tidal changes / a concrete path defines the poolside deck and changing cubicles / a bathing machine is evoked by the stair, cage and portal frame to represent the closeted space of expected modesty associated with the early days of bathing / the portal frame of the bathing machine signals Morse code across the bay / Installed: June 1999.

This artwork was deaccessioned in 2019

Each work included in the Sydney Sculpture Walk has been a significant artistic and cultural contribution to this city, adding renewed interest and meaning to established city spaces.

A 2016 review of the Sydney Sculpture Walk has resulted in the deaccession of three works, including Archaeology of Bathing. This decision was not taken lightly.