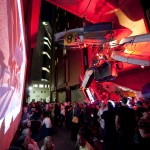 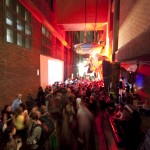 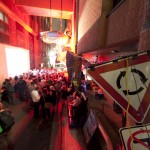 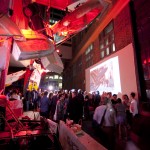 Today it was reported that the oceans are becoming more acidic.

This is yet another in a series of markers on the road to irreversible damage of our environment. When the oceans reach a certain point in this cycle, all life within the water dies leading to death on such a large scale that the decaying bio-mass will create a future store of liquid oil equal to the stores we have burnt.

The cycle is thus completed and we as humans may not survive.

The Seven Metre Bar, hidden in an under croft in Underwood Street near Circular Quay, sat at an elevation of 7 metres above sea level. This interactive installation celebrated inaction on climate change, with a drinking bar built inside the detritus of our age of progress and rampant capitalism.

At an elevation of 7 metres the bar marked a reading of possible worst case sea level rise at the turn of the century. At 8 meters Underwood Street would be underwater with tidal surges and the flotsam and jetsam of our civilisation. This collaboration between an artist, architect/gamer and landscape architect combined the landscape of weather, an architecture of catastrophe and the technology of games.

Old cars, boats, building materials and other debris including a mannequin, were suspended from a walkway above this dark city laneway, as though tangled like seaweed at the edge of beaches. The bar responded to visiting crowds and their collective inaction, with an interactive animation projected onto a wall showing people swimming – the more people in the bar, the more swimmers appeared. Participants were intended to see and feel the consequences of their inaction. Cocktails with names such as ‘Storm’ and ‘Green House Punch’ were served in jars or take-away hot chip cups.

This installation was conceived as a reaction to our progressive drowning until at 75m depth, Sydney to the Blue Mountains would be swallowed for all time as the North and South polar icecaps disappear entirely.